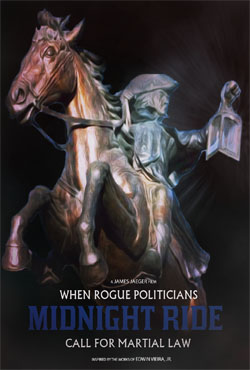 So what’s the big deal about another documentary film about the Second Amendment?

This film picks up where MOLON LABE left off, and not only deals with the Second Amendment, but also exposes the four types of “martial law”.  Powerful, compelling, and packed with Constitutional wisdom, MIDNIGHT RIDE  is going to put Oath Keepers in the saddle for the ride of our lives!

What do I mean by that? Glad you asked. This is going to be the first documentary film which centers on *why* Oath Keepers exists. Not only is the cast packed with Oath Keepers, the script has been carefully created to incorporate most of our “Ten Orders We Shall Not Obey”.

Yes, you heard me correctly. Our “Ten Orders” will be a feature part of this film, and will be interfaced with Dr. Edwin Vieira, Jr.’s remarkable dissertation on the four types of “martial law” and what the Constitution has to say about them.

James Jaeger and his Matrix Entertainment has offered Oath Keepers a perfect venue for some of the finest RT&I we’ve ever seen, and all we have to do to get that promotional push for our mission is help James get the movie financed. There are ways each of us can help, even those who can’t send in ten or twenty bucks — it’s perfect RT&I to simply tell your email list and friends at church and work  about the movie, share the link to the movie’s website, and talk it up. Believe it or not, that will help.

Matrix Entertainment and Oath Keepers are excited to announce that Ron Paul  has joined the cast of MIDNIGHT RIDE.  Dr. Paul’s presence in this film will be a blessing in many ways. For a guy who never became President, Ron Paul enjoys a popularity unparalleled among many who have. The vibrancy and resiliency of the Tea Party are nurtured by Ron Paul as he continues to give of himself tirelessly and selflessly on behalf of our Constitution.

In the movie MIDNIGHT RIDE Ron Paul will give wings to Edwin Vieira’s assessment of the four types of “martial law”, and what our Constitution has to say about each of those. Oath Keepers will be talking more and more about Edwin Vieira’s book, By Tyranny Out Of Necessity: The Bastardy of “Martial Law“. That is the book which inspired James Jaeger to make this film. James and Edwin both agreed that the film would be made in the spirit of Paul Revere’s famous “midnight ride” of April 18, 1775. Who better to interview for such a film than the champion of liberty and freedom himself, Dr. Ron Paul? We are grateful to Dr. Paul for his support of this important movie documentary on “martial law”.

So, yes, we’re excited to have Ron Paul on board for the making of MIDNIGHT RIDE; but we’ve got more good news.

KrisAnne Hall has also agreed to interview for the film.  She is one to whom I look up as an inspiring light in a darkened world, for she gives a message of hope as she travels around the nation doing presentations for groups of Constitution-minded patriots. A true Christian of very strong faith, KrisAnne Hall is a Constitutional attorney, researcher, author, and public speaker who fearlessly reminds the General government in WDC just where the ten-square-mile boundaries lie and where the boundaries of Article 1, Section 8 fall.

In our first announcement about this new film I concluded the article with a video of KrisAnne Hall’s powerful presentation at the Press Club this past September. I expressed my hope that she would agree to appear in our movie. For new readers here I will include that video here. Enjoy this sample of KrisAnne Hall’s Constitutional spirit and imagine while viewing this video just how much energy – and spirit — she will add to the movie.

That outstanding presentation was rendered at Sheriff Mack’s CSPOA Resolution press conference at the national Press Club in WDC. (See below) KrisAnne Hall is a Constitutional Attorney, public speaker, book author, and Constitutional advocate. So James Jaeger and I are beaming that KrisAnne Hall has agreed to interview for MIDNIGHT RIDE. You may get acquainted with KrisAnne Hall’s work at her website:

My copy of KrisAnne Hall’s newest book, “Sovereign Duty“, is on the way to my post office box. Can’t wait to read it.  Find out about that book and order your copy while you’re visiting her website —  http://krisannehall.com/sovereign-duty-let-show-hope/ 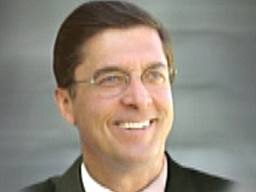 Sheriff Mack is a member of Oath Keepers national Board of Directors and is the founder and president of the Constitutional Sheriffs and Peace Officers Association (CSPOA).  Oath Keepers is very proud of the work CSPOA has accomplished, including their famous “Resolution” which was written this past January, 2014 and which was delivered to all 535 members of Congress on September 16 and 17, 2014. CSPOA held a press conference at that time, and that was the occasion on which KrisAnne Hall gave her stunning presentation above.

So I am announcing here that Ron Paul, KrisAnne Hall, and Sheriff Mack have joined the cast of the movie MIDNIGHT RIDE. In James’ update below we’ll see the entire cast as it stands today.

Also of interest, one of our newer Lifetime members in Oath Keepers is Ted Nugent, the outspoken advocate for the Second Amendment — and if I can get his secretary to return my phone calls and emails, I’ll invite Brother Nugent into MIDNIGHT RIDE. I think he would add some zip to the narrative, and since he is on the Board of Directors for the NRA,  it would be good to have him in this film.

So let’s talk about the film itself and what we as Oath Keepers can do to help make it come to life. Just as Oath Keepers members pitched in to help finance the production of MOLON LABE,  we are happy to help James Jaeger raise money to make this film happen. The movie can be completed in mere months if we get the bucks coming in. As the ashes of Ferguson, Missouri smoulder and as Oath Keepers enjoys a huge success with our stand for justice there, my idea for the perfect follow-up is to engage Oath Keepers members in the project of fundraising for MIDNIGHT RIDE. I’ll repeat: This project is RT&I (Reach, Teach, and Inspire) in the fullest sense.

The way we did it for MOLON LABE, was to offer end-credits to every member who contributes a hundred dollars or more to the production of the movie.  We also listed each State chapter (or local chapter) which contributed $200.00 or more to the making of that film. I think we had around fourteen or fifteen State and local chapters listed in the end credits for the film. Already for MIDNIGHT RIDE our Indiana State chapter has pledged $200.00, so I salute our good folks in Indiana for being the first chapter to earn screen credits.

Our “marching orders” for all Oath Keepers who see this project as an extension of our RT&I mission begin with each of us going to the film’s website and getting familiar with the following points of interest as laid out by James Jaeger himself, who has sent me his December 05, 2014, update on the film’s progress.  Here are exceprts from James’ most recent update.

Dear MIDNIGHT RIDE Associate,
The production of MIDNIGHT RIDE is coming along nicely. Former congressman/presidential candidate, RON PAUL is on board along with columnist-American patriot, DEVVY KIDD and former sheriff of Graham County, Arizona/congressional candidate, SHERIFF MACK. Constitutional attorney and author KrisAnne Hall has agreed to join in. Author & Freedom Force Founder, G. EDWARD GRIFFIN was interviewed on Monday.
Previously, Tea Party co-founder, WALTER REDDY and Ron Paul-activist, ROSIE HAAS, were interviewed and they are now in the 2.5-minute trailer at http://www.MidnightRide.us/trailer  We will update the trailer with MR. GRIFFIN’s interview as well as the various interviews as they are completed.  (snip)
We have also roughly scheduled four interviews in the Montana area — STEWART RHODES, ELIAS ALIAS, PASTOR CHUCK BALDWIN and DAN HAPPEL — for the last week of January.  Some of the interviews in the Texas area — RON PAUL,and maybe ALEX JONES if he comes on board — have been scheduled for the middle of January.  LARRY PRATT and EDWIN VIEIRA have been scheduled for next week and the end of December, respectively. KrisAnne Hall and David R. Gillie are not yet scheduled but will be shortly.

MIDNIGHT RIDE is the sister film to MOLON LABE, both films about the Second Amendment and its strict Constitutional application.  MOLON LABE and MIDNIGHT RIDE — presented by MATRIX ENTERTAINMENT and OATH KEEPERS — are inspired by works of Dr. Edwin Vieira, Jr.  (snip) MIDNIGHT RIDE explains how the Militia System would preserve the Constitutional Order if ever rogue politicians attempted martial law.  See most current and final narration script.
Help us get this film done by going to http://www.MidnightRide.us/donate and donating what you can.  We will accord you a Producer, Executive Producer, Associate Producer or Production Associate screen credit on the completed movie as acknowledgement for your contribution.  Hey, where else can you get a screen credit on a RON PAUL film with so many celebrity experts for as little as $100?
But if you just can’t afford to donate right now, at least please excerpt this Progress Report and send it to your email list or post it on your website.  Also, please include the donation URL of http://www.MidnightRide.us/donate if you do.
Thank you in advance for any help you can grant for this current production.  Our research, and these films, proceed on the backs of concerned men and women who know we have the greatest country in history, but who seek to build an even “more perfect union”.
Sincerely,

I will close by noting that our Missouri Oath Keepers who protected businesses in Ferguson, Missouri and spoke well on camera have generated much good publicity for Oath Keepers. We gained from the good coverage by the New York Times, Fox News, and Ben Swann among many others. That momentum can carry forward as we now document the fullest meaning embodied in our Constitution and our Bill of Rights when they speak of our unalienable rights to free and armed society. Oath Keepers at Ferguson, Missouri demonstrated the proper use of firearms in the hands of “We The People”. The writings of Edwin Vieira and the subsequent movies by James Jaeger reveal Oath Keepers’ solid foundation in the highest law of the land. This movie will place us on the record nicely. Help us get this movie completed quickly, and then help us make it go viral across America. Contribute well and get your name indelibly inscribed in the end-credits on the screen for all time.Thank you, Oath Keepers!

Note: This article was written for, and published at, Oath Keepers dot org. Link —