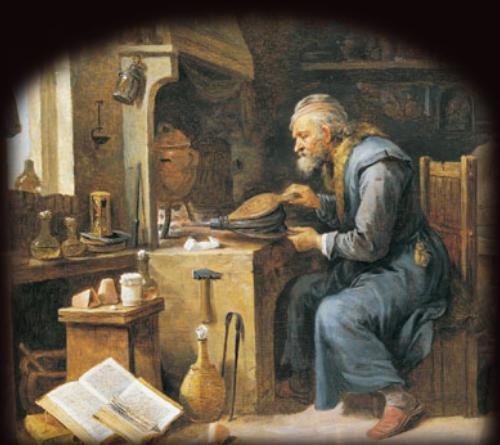 Hermes, ruler of the world, dweller in the heart, circle of the moon,
Round and square, inventor of the words of the tongue,
Obedient to justice, wearer of the chlamys, shod in winged sandals,
Guardian of the many-sounding tongue, prophet to mortals.

The verse above was taken from opposite page 193, which is the beginning of the chapter entitled: “The Spirit In The Bottle”, in the book Alchemical Studies by Dr. Carl G. Jung. Bollingen Series, Princeton, 1967. 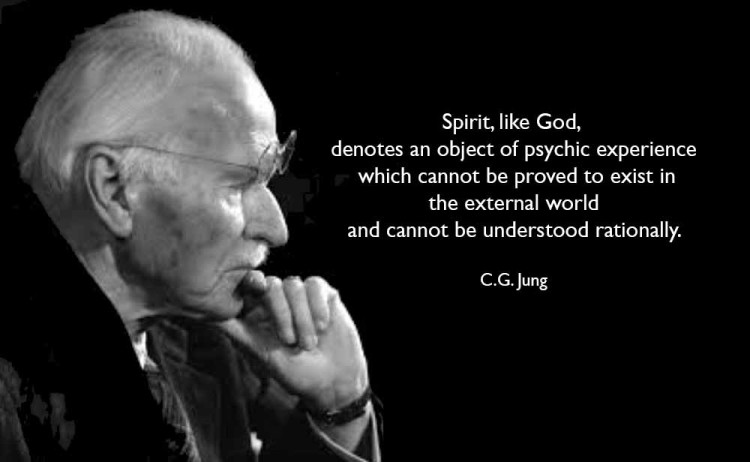 Long ago, somewhere near the edge of a pre-primordial village, an old alchemist pumped his billows at the crucible of his work. During his long night of work he added bits of metal and mineral to a coarse glob of fire-married formulations, heating the elements of the only world he saw, stirring them together as his fire brought them slowly to melt. He then would allow them to cool and become solid once again. Pitching in a pinch of yet another element, he would fire the crucible over again until the mass was a molten bubble of liquid metal. It was then that he could stir his metallic formula with charcoal, stirring slowly as one might stir one’s soup.

He made signs with the movements of his stirring, tracing invisible geometries as he directed the charcoal rod through the molten, heavy liquid. He muttered, at times, several phrases which he had learned from a previous alchemist, long dead.

Leaning over his work, the old brow shed a bead of sweat from time to time, which hissed upon hitting the crucible’s fiery orb.

It was not for lack of discernment that the old alchemist permitted his sweat to fall upon his heated work. Rather, it was his intent. He knew that a human salt was carried in his sweat as it beaded on his brow and fell into his fire. He had many kinds of salts, as well as chemicals and compounds, organic and mineral powders and pastes. His formula was extensive in his later years, requiring combinations of many things. But one of his constants, a variable he never varied, was his inclusion of this human salt. He had even entered it into his notes, which would only be seen by one man, that being his apprentice, the vessel through which would pass his formula.

Speaking of “human”, the alchemystical tradition yields to a casual study the marked contrast of the two approaches to the science. One approach to alchemy, the oldest, secured within it’s mysterious symbolisms a profile of the enlightenment of the soul from base birth to spiritual transcendence. To this sort of alchemist, the metals and ingredients of his formula were symbolic. That sort of alchemist acquainted himself with figurative concepts. The tree, the well, the field, it’s bird above the lea and playful fox, the farther wood and then a sea. Such things as bear greater than spectrums seem.

Not all sandals show their wings. Magic inmixed, chakraic alignment, spun apex of a coiled spring, meteor trails in stardust. Things such as hath not to do with proxy perception. Archetypal energies lurking at the peripheries of the mind’s grasp. The mystical in practice.

This eccentric old alchemist was crazy, and the village people all knew it. They could plainly see he had no gold, and was therefore worthless. He slept and worked a short way down the trail from the village wall, but he would, rarely, enter the village if he had reason.

However, in time there came a second sort of alchemist, and his mood was one of materiality. Having heard from a distance that the goal of alchemy was the transmutation of base lead into gold, and perceiving the utilitarian marvel of such a thought, any insensitive man might set about to make himself wealthy by making gold at home. As we might surmise, such men were small, and have been overlooked by history, excepting that they inadvertinently gave to mankind the science of chemistry. (Good gift gone bad, eh?) Their motive, however, seems to have spread infectuously into the society of man, and even today greed remains an ingredient of our world. Still, none can claim success in that approach to Alchemy. Not one of the self-professed alchemists has made a grain of gold from lead.

But our old alchemist understood a higher origin of the tradition of Alchemy. A tradition to which he could trace points previous to Atlantis, and elaborate upon the shifts of shapes in the tradition’s evolution.

He sought the “aurum non vulgi”, the natural symbol of the enlightened soul. He labored long, as he had for many nights in his eccentric life.

He was seen to be a fool by the village which tolerated, just barely, his life.

He, and the village at which he lived, perished in time each and each.

Some centuries ambled by.

Each and each, the alchemist and the village reappeared in time.

Of the two, only the alchemist understood their true relationship with each other; only he knew of their previous relationship. He had become a thinker of philosophy, but, owing to there being only one of him while the village had the many, the village, in traversing the centuries of non-existence,  had upon its reappearance, become a corporate entity.

Knowing inherently that this corporate entity was but a new facade for an old village, even so as he himself was a new facade for an old Alchemist, he waited and watched as the vibrant elements of the city of man, the corporatized entityship all wrapped in blankets of civilization, heated and then cooled. The ways of man en masse expanded and contracted through several decades as the old Alchemist watched, illustrating in that way the volatility intrinsic to civilization’s foundation. He studied the coagulating mass closely.

He saw that the village’s formula had failed. Misery and mirth marked the mane of man, and he roared throughout the forest whenever he left the safety of the city walls. Soon enough, he saw that unnatural smokes rose above the entity’s countenance, which knew not the forest’s solitary inhabitant. Synthetic situations surfaced. The tone of it’s civil sheen was tense and stressed. Unhappiness abounded, fear was in and upon everyone.

“Odd”, thought the old alchemist to himself as he pulled thoughtfully at his long beard, “the village-maker must have omitted from his formula the salt of the earth”. By the stars – the formula is incomplete. I must find some way to infuse the missing human salt…

Whereupon he pitched a pinch upon the pile of lifeless metals and sent his voice like fire in the firmaments above the village until it gasped and grasped his breath, and came to life, a molten instrument of his heart. His billows like a wind fed to fire the earth’s air as fluid life divined the water from his sweat, leaving to the melt’s molten glowing egg of liquid metal the reagent salt.

And he dissolved the village by sending embers of fire into the minds of the village throngs, who uproared smartly in taking it’s hot light after having simmered so long in darkness. The process was begun. Billow pumps and breath in a translucent tube. The electrified fire ran quickly through the village people’s minds, heated by and heating in return the metallic beams of the village structure, which soon enough glowed red before their melting.

In candlelight he brought the charcoal rod close to the flame, preparing it by tipping it red where it rested by the fire. He cast from his fingers across the hulk of the village structure a granulated flux which loosened the crucible’s walls to the mass at his focus. He reached for a gray powder and sprinkled it too upon the work, all the while pumping his billow with a foot. He peered directly at the work and watched it’s slump begin. It resisted mightily before yielding as he knew it finally would, it’s form folding to gravity’s gate as fate foretold by signet.

Finally the melting began to liquify, and the metal pooled with a bright, glowing, shimmery surface on which floated round film-spots of translucent flux. He brought the black charcoal rod down into the bubble of the wet metal at it’s farthest side, opposite his eyes. He carefully drew the rod’s tip in a half-circle within the metal’s globular globe, then withdrew the tip to the air above the melt.

Next he inserted the tip again at the top-center edge of the melt and dragged a stir, starting the tracing of a complete circle below the half-circle, downward and over and upward to meet finally at it’s beginning point. Again he withdrew the rod into the air. Then his rod entered the melt from top center and made the sign of the cross, and withdrew to return with the sign of Mercury on the right arm of the cross. At the bottom of the cross’s leg he formed a pyramid’s triangle, into which he put the symbol of the caduceus. Next he traced the sign of quicksilver at the left arm of the cross.

His closeness to the work had warmed his old face, and once again his brow produced it’s sweat. Feeling it pool, and knowing that the melt was now at temperature, he leaned forward even closer to the glowing melt and saw that the sun and the moon were joined in dance, the four elements which junctured as the four arms of the cross intersected were combined with a dot of conjoinment’s ether. The quicksilver ran every line in the symbol instantly and perpetually, a fluid, primitive neon pattern. As his symbol appeared to be ready, he quietly spoke seven words which he would not permit to be repeated, let fall into the center of the sunsign his sweatlet of human salt, and then stirred the metallic universe rapidly, in circles clockwise, to erase his magic sign. His foot stopped pumping his billow and he leaned back and upright again, moving his tired shoulders high in a stretch, wagging his long shaggy hair. He retired from the heat of his work and stepped outside under cicada song and starshine.

A cool breeze brought to his face the scent of hope. It was encased in the sense of knowing he had given the best of himself into the work. He smiled as his eyes scanned the night’s tree-tops. Beyond those trees lay the village which would conquer the world, now but a fortnight removed from it’s own demise and distant rebirth.

“Vision displaces knowledge….” he mused in a satisfied whisper, as he lifted his eyes to the encouraging stars who’s lights had pooled in a chalice moon. “Solve et Coagula”. 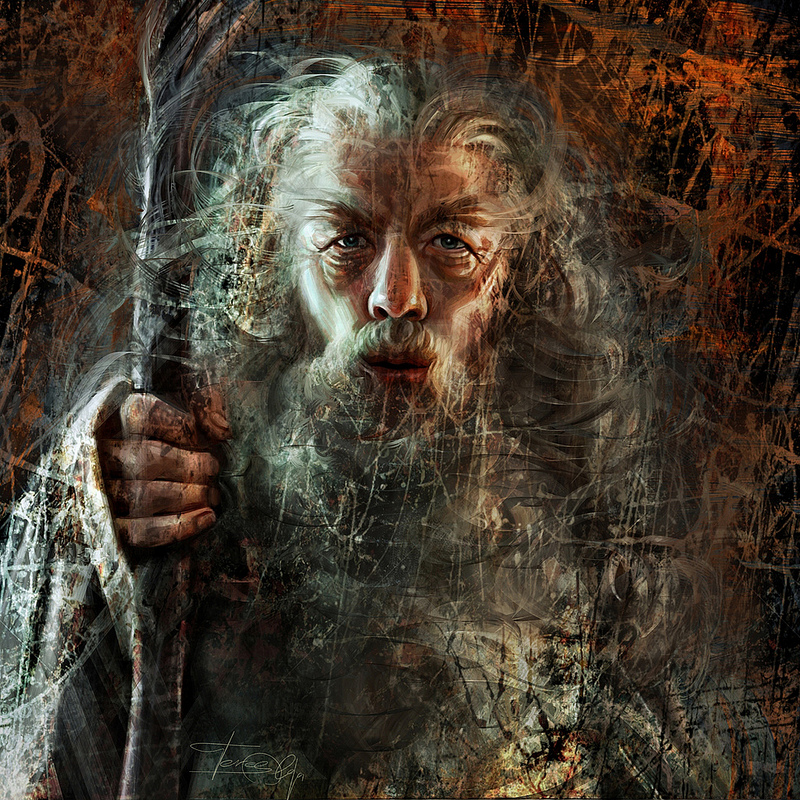